The following Christmas, I remember, my stepgrandparents gave me the first Jeeves I'd ever encountered. No preparation - that's the way to do it. If you tell someone that there's this marvellous book, oh it's so funny, you'll laugh all day, I can't tell you how amusing it is, there's this story where...You'll hate it before you start. It hasn't got a chance. Don't say a word: just hand it over, and hold your tongue. So, with no helpful advice, never having heard of Jeeves or Bertie Wooster or P.G. Wodehouse, I unwrapped the modest-looking paperback called Very Good, Jeeves, and started to read. This was fifty-nine years ago, and I'm still reading Wodehouse, still laughing, still entranced by the fountain-like brilliance of the style, and increasingly, now, marvelling not so much at the cleverness of Jeeves as at the miracle of a hero who is faultlessly good and yet so delightful company. Bertie's only flaw is the most forgivable and harmless one of vanity: we know we can rely on him to be seduced by this pair of Old Etonian spats, or that white mess-jacket, or that Tyrolean hat, and that Jeeves will reliably deal with the situation (he persuades Bertie to relinquish the hat by telling him that the police are looking for a burglar known as Alpine Joe). Good characters are much harder to write than villains, as every storyteller knows, and Wodehouse pulled off a double miracle by making us believe that the 'mentally negligable' Bertie is a master of the most sparkling style in English literature.

Excerpt from an essay by Philip Pullman, the author of the His Dark Materials trilogy, in the book The Gifts of Reading, Essays on the Joys of Reading, Giving and Receiving Books.

So, my fellow Drones, my fellow Wodehouse-readers and collectors, I call upon you to spread the Word! We all have vast collections of Wodehouse books, often with many doubles: give them away to young people and share the joy. And when in doubt remember the gospel of Luke (Luke 8.6):

When a large crowd had collected and people were coming to him from one town after another, he spoke to them and gave them this parable: "A sower went out to sow his seed, and while he was sowing, some of the seed fell by the roadside and was trodden down and birds gobbled it up. Some fell on the rock, and when it sprouted it withered for lack of moisture. Some fell among thorn-bushes which grew up with the seeds and choked the life out of them. But some seed fell on good soil and grew and produced a crop - a hundred times what had been sown." And when he had said this, he called out "Let the man who has ears to hear use them!"

So, my fellow Drones, my fellow Wodehousians, sow, and don't be the old miser, found dead between his piles of Penguins', don't be the lone survivor when all actual Drones have turned to dust, but surround you with the joy of new life, new members, jay, new friends. It only takes the stretched hand with in it a book, a short goodbye, and than the hope you have made somebody happy by giving him a thousand occasions of chuckling in bed, in the train, on the beach and on so many other places: the Gift of Reading Wodehouse. 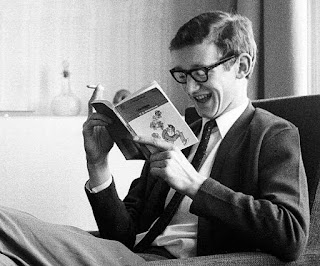